But over the last five years in Alberta, home builders have
been on a bit of a rollercoaster ride. With starts peaking
above 50,000 during the heady days of 2008, too
many new homes were being placed on the market.
When the economic slowdown came the following
year, housing starts tumbled sharply—as did the
selling price for both new and existing homes. There
was an excess of real estate that caused the muchdreaded
bubble.

Since that time, things have improved. Even though
2011 was another boom year for Alberta’s economy,
home builders showed a bit more constraint—
housing starts climbed their way back to the 5-year
average, but never spiked too much higher than that.
This time around, builders have avoided a glut of
inventory on the market. As a result, Alberta’s housing
market enters 2013 in excellent balance. 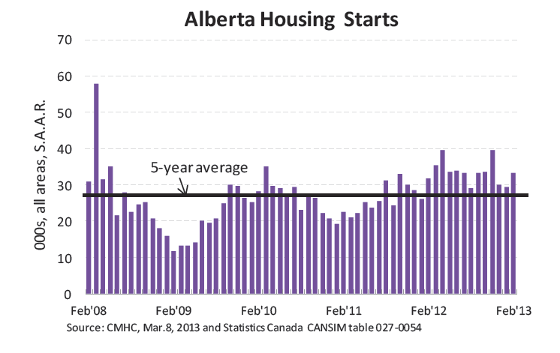